The next three posts will share each of our babies’ journey to come home in chronological order. My goal is to get these done before their first birthday so I need to get writing!

Ava Angelina Joyce was known as the penthouse baby for most of my pregnancy. She was our Baby C and she resided near my rib cage on the right side. It will always be a mystery to me why none of my kids found the open space on my upper left side, but they all tended to stay in the same areas. I would see Ava punch and kick through my belly and I felt her the most often. She came out last at 4:38 am.

Ava was in Pod 6 in the NICU- first bed on the left. She was the first to take the oxygen from her nose and to have her IV nutrition removed. She slept hard and often preferred to be snuggled up in her isolate instead of being held. She rarely had any bradycardias. One night while I was still hospitalized and couldn’t really travel to the NICU, Mike went down to take some of my milk to the babies. He was gone for awhile and I started to wonder where he was as I was feeling more uncomfortable. Little did I know that he was spending time with our youngest daughter learning to hold and care for her. She was the first baby either of us got to hold. 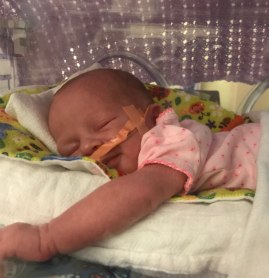 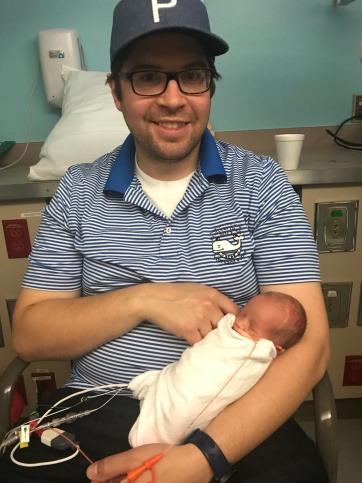 I’ll never forget the day that we came into the NICU and her nurse Julie told us she had started taking her bottle consistently and that the next step was to start “cold stressing” to see if she could maintain her temperature for 12 hours. If she passed she would be going into an open crib. It was so surprising to see Ava catch on to eating so fast. One day we felt like it would be weeks before we had a baby home with us, and the next Ava is conquering all of her challenges. We joke that she knew this was her only opportunity to be an only child. On June 26, she went to a crib which meant cute jammies, being all swaddled up and time spent in the Mamaroo! 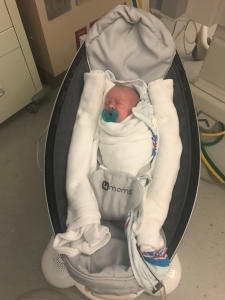 Her last test would be the car seat test. We thought the car seat test was making sure they fit in the car seat- that would be too easy. The real car seat test is sitting in a car seat for 90 minutes without any desaturations or bradycardias. When we left the NICU that night, I prayed so hard that she would pass. The nurses promised that if she passed they would put a note in her crib that I could see when I got up to pump in the middle of the night. I quickly logged on to check the webcam. After seeing she passed, I ran down the hallway back to our room to tell Mike the good news. By 8 am, there was a new sign: “I’m going home today!” 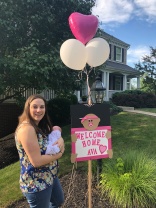 For parents with one child in the NICU, you collect your stuff and head home on your new adventure. With both Ava and Owen I turned to the nurses and said, “See you tomorrow.” It is such an odd feeling to end this chapter with one child knowing you have two more who are still at the hospital. Having Ava home made us want the rest of our family home so much more. Ava would have two weeks as an only child before her big brother would make his way home.

Ava was the easiest baby when she came home. She was 5lbs and looked so petite laying in her crib. We woke her up to feed her every three hours the first few weeks until her brother arrived home. I definitely didn’t sleep the first night she was home just listening to her snoring down the hall. She spent a majority of her time doing tummy time on her elephant mat. If she wasn’t on her belly she was on her boppy lounger (best thing ever) or snuggling with her parents. She even hung out one afternoon on her boppy on a window sill in the NICU. Being an only child has its perks, as Ava got to attend her Great Grandma’s surprise 90th birthday party.  She also got extra time with her Mimi who would watch her while I spent afternoons at the NICU with her siblings. 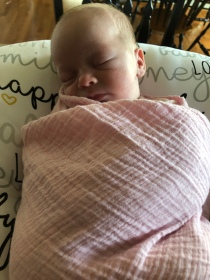 After her first pediatrician appointment we took her to Chipotle. We figured we would be adventurous, since it was the only time we would really have one baby. We fed her there and then she slept through the commotion of the restaurant. I couldn’t believe the number of people who stopped to talk to us about her. The commentary was often around how small she was and I had to keep myself from launching into our story. We never thought our kids looked small in that first month. It isn’t until now that we realize how small they really were.

At 11 months old, Ava is still the smallest of the trio but she has the loudest voice. This girl can launch tears the moment she starts to wail and I do mean wail. She is finally getting motivated to move as she has been very content to sit and watch her siblings until now. She loves to eat and intently watches Sesame Street. She will dance to all the songs. Ava mastered riding on the “toddler town car” first and loves wagon rides and swinging. We love watching her personality bloom. She has come a long way from 3lbs 5oz.