Once I came back to reality on Thursday and could think with a clear mind, I was able to talk more with my doctors about my situation. Blood pressure cuffs give me anxiety. I hate the squeezing feeling and then feeling your own pulse. It creeps me out. This isn’t a new thing for me. I have always hated all things medical. I swore up and down that my blood pressure was high because of my anxiety. And that my anxiety was increasing each time someone took my blood pressure.

The blood pressure machine was also behaving oddly. The cuff would pop off my arm. They tried a larger size but it wasn’t working well. I was convinced both the machine and my anxiety were showing my blood pressure was higher than it actually was. That’s crazy, right? Well, its because I didn’t feel sick. Beyond having swelling in my legs and feet, I didn’t have any of the symptoms they asked about when they rounded. Based on this, I thought I would be a West Penn Hospital tenant for the next three weeks.

My friends brought magazines, books, board games– you name it. I went for an occasional walk. I looked like I was staying in a hotel, other than the IV in my hand. So many friends and family visited and others texted to check in. But everything changed on Saturday night.

Around 9:00pm my blood pressure readings had started to get higher. Up until now I had occasional high blood pressure readings, but they normally went back down. The nurse had told me that because I had a few in a row they wanted me to wear the cuff and have it test me every 15 minutes. My best friend, Vicki, and Mike were there. We were actually watching the Stanley Cup Final and cheering against the Capitals. When suddenly Dr. Hoyson and my favorite resident appeared in the door. They sat down on the couch. They weren’t happy with my blood pressures. She said, “If you have one more blood pressure like the one you just had, we are having a birthday party.” I started to sob. She stood up from the couch and held me, “you have done everything you can for these babies, but we are reaching a point where they will be safer outside of your body.” I continued to cry as we started to discuss the plan. Mike went to go call our parents.

When I last ate would determine how soon the c-section could happen and they would want to consult with Maternal Fetal Medicine. They would be sending a neonatologist to come talk to us about the state of the babies’ development at 31 weeks and 2 days and give us more information about the NICU. The conversation with the neonatologist was so difficult for Mike and I. It’s really hard to hear all the ways your baby is not going to be prepared for the world. I trusted my doctors though and I knew me and my children were in great hands.

My estimated time of a c-section was after midnight. What would I be doing between now and that time? More Magnesium Sulfate. But this time, there would be no ice chips or water since I would be going into surgery in the next few hours. This is where we meet Lisa, my other angel nurse. After the bolus was over and the drip began, I think Lisa sensed my nervousness. She kept me talking as I kept sighing and taking deep breaths to keep my nerves in control. There was a question from anesthesiology of whether I could have a non-sedated c-section which required more blood work and waiting.

It was a busy night at the hospital and so when the decision was finally made that I was in the clear for my c-section, it was 4 am. Since the beginning I had been terrified of having a c-section. So terrified, that I had a consult with the head of OB anesthesiology and she had given us a tour of the operating room.

The experience could not have been better. I made it clear to all my doctors and nurses that I needed them to talk to me to keep me calm. The anesthesiologist resident was my favorite. He made a list of things we were going to talk about before we got into the operating room. Dr. Hoyson held my legs while they did my spinal. And when I started to feel nauseous, she laid me down and held the basin while I tried to puke. When I stopped for long enough, she said “Ok, Alyson. Are you ready? I’m going to go scrub in.” She took care of me like I was part of her family. The anesthesiologist held my hand when I started to get a bit more anxious. It was an emotional experience for both Mike and I. I remember both of us tearing up. This was not the night we had planned for but we were about to become parents. We were worried for them but hoped for the best.

I wasn’t sure if I wanted to see the babies over the curtain as they took each of them out, but I opted to see Owen as he was Baby A. I decided not to see the other two, because it had increased my anxiety a bit. It took a little while longer to get Amelia out and Mike tells me that I yelled “Jess, how we doing over there?” She responded, “Working on it, Alyson!” Apparently I was relaxed enough to start calling my doctors by their first names. Owen Garnet arrived at 4:33am on June 3 and Amelia Marie came three minutes later at 4:36am, followed by Ava Angelina at 4:38am. All three were wrapped in plastic to maintain their body heat and taken to the NICU. Mike remembers each of them crying. I just remember wanting to know their stats. The attending anesthesiologist grabbed Mike’s phone and ran to the other side of the curtain to snap some pictures. It took me months before I could really look at those photos. 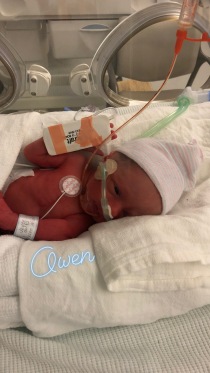 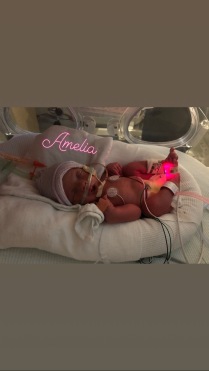 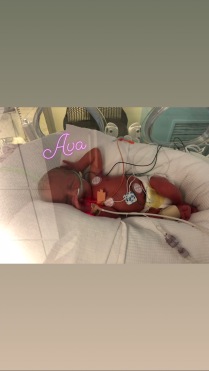 I can’t begin to describe how amazing it felt to have all that pressure released from my body. I had no idea that I had been walking around like a pressure cooker for the last several months. It was a glorious feeling.

After surgery I laid in recovery as Mike spooned ice chips to me. I have never been so happy to have some water. I ate those chips as fast as I possibly could. A nurse came to take Mike to see our families. And soon after, the neonatologist came to take Mike to meet the babies. I don’t remember much about the report she gave us but it seemed like everything was as good as it could be. I wouldn’t be meeting them until the next day because I was headed back to my room for 24 more hours of Magnesium Sulfate. 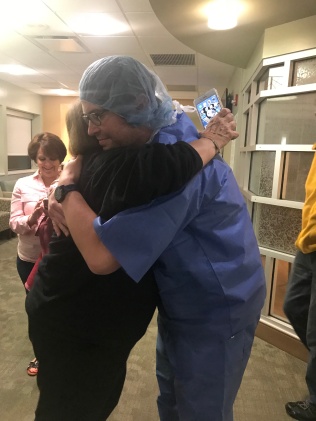 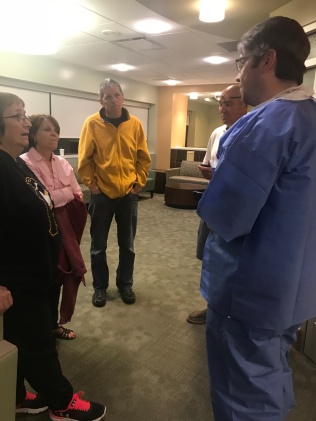